Do You have a friend or loved one in jail?  Contact Us for quick results!

Not sure what is required of you? We understand your situation and guarantee professional, helpful service without judgment. Midnight Run Bail Bonds office provides excellent customer service.

For immediate assistance, you can reach us anytime.
Just Click Here!

Once an individual is arrested, they are usually brought to a detention facility for booking. There, the authorities will record the accused’s personal details, take pictures and fingerprints, and record the information about the alleged criminal offense. Records will be searched for any past offenses or outstanding warrants. Afterward, the accused will be placed in a holding cell.

Shortly after the arrest, bail will be determined. It is mandated by law to set the bail within twelve hours of the issuance of the complaint. Typically, a judge or magistrate establishes the bail amount. Most detention centers have general bail schedules that define bail amounts for common crimes. The bail system is designed to guarantee the appearance of the accused in a court of law. This is where the surety agent in Citrus County will come into the process.

If the bail is posted and there are no additional criminal charges pending, the defendant is discharged until the charges are dealt with. The defendant will be out on bail as long as the bail’s conditions are met. For some offenders, the bail may be set much higher or it may be rejected. The judge’s main concern is the security of the community, taking into account the criminal history of the accused. 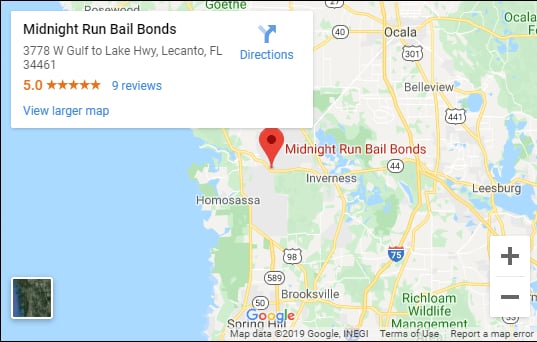